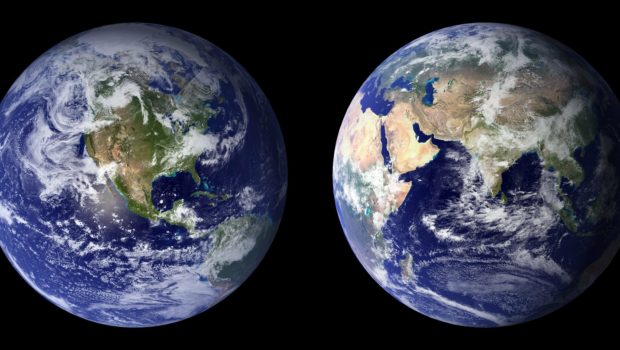 On the 5th of March this year, the Sun ‘erupted’ with a series of coronal mass ejections (CMEs) that sent torrents of high energy charged particles hurtling towards Earth at hundreds of metres per second. CMEs are relatively common, and when the ejection is directed towards Earth the impact can cause a geomagnetic storm that can disrupt the Earth’s magnetosphere. In short, this is bad – the magnetosphere is a magnetic field that protects us from the effects of solar winds (streams of charged particles from the outer atmosphere of the sun). Fortunately the recent storm passed without major incident, but with a solar maximum predicted for 2012 – 2013 more could be on the way.

The Earth’s magnetosphere is effectively a dipole, i.e. has two magnetic poles (the North and South poles) and is tilted by approximately 11 degrees with respect to the Earth’s axis. This field varies over time, and frequently over the history of the Earth the entire field has ‘flipped’ so that magnetic North and South swap places. The last reversal was some 780,000 years ago and some say that we are therefore ‘overdue’ another. However, these reversals do not occur with any sort of clockwork regularity, so it’s very hard to tell.

Now, I’m sure most people have heard that we’re all going to die this year? Apparently the Mayans said so – although the reasoning behind this is that the Mayan calendar stops on 20th December 2012, therefore that must be doomsday. Our calendar ends on 31st December every year and yet every year the 1st of January follows merrily after with its associated resolutions and hangovers. Anyway, one of the (many) suggestions as to how we are all going to meet our untimely end is through a geomagnetic reversal – this will apparently cause the magnetic field to collapse and we will be annihilated by the Sun’s radiation. Cheerful!

It is indeed true that the Earth’s magnetic field is weakening, but the field is variable and compared to historical data is still maintaining above average strength. The poles also wander – they have been doing so at varying speeds since measurement began and do not have any fixed geographical location. Both of these phenomena have caused some to believe that we are on the brink of a reversal and subsequent collapse of the magnetic field. While some geochronologists say that a weakening field could indicate an upcoming reversal, the simple truth is that we just don’t know. So, while we can’t say there won’t be a geomagnetic reversal on the 20th December 2012, it’s extremely unlikely. Even if there was, a full collapse of the field is even more unlikely – mass extinction is not imminent. Early Homo erectus survived through the last geomagnetic reversal with relative ease, and we have much fancier technology nowadays. The chances are we would be fine – while the dipolar magnetic field settled into its new state there would undoubtedly be some disturbance, but a weakened magnetosphere does not mean no magnetic protection. Besides, if nothing else we have a thick atmosphere to protect us too.

So, is the world going to end this year? Probably not. And even less likely that it will through a geomagnetic reversal. We can’t predict when they will occur, or what their effects would ultimately be – I highly doubt the Mayans could either…