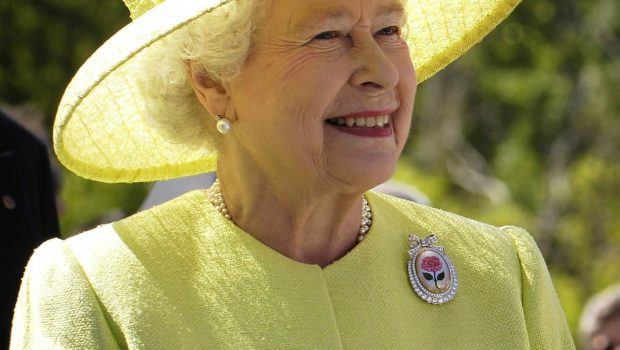 Fed up of ‘Keep Calm’ posters? Bored of bunting? Here’s a rather bizarre list of ‘alternative’ sciency Jubilee memorabilia, with a bit of Olympic fun thrown in

All too often we are told that science and art are not to be mixed, but often we find the most impressive creations are to be found at the collision of the two worlds. This summer, take inspiration from this brief review and let your scientific creativity flow. How will you celebrate the Jubolympics?

In  London, you can see “Diamonds: A Jubilee Celebration,” which will display the reunion of the principal stones cut from the Cullinan Diamond—the largest ever found, and now part of Her Majesty’s personal jewels. The Crown Jewels, amongst diamonds worn by a whole heap of British monarchs will be on display from the end of June.

As any scientist could tell you, diamonds are so much more than sparkling crystals used to show off one’s economic good fortune. A crystal of diamond is of course a single molecule. It is an excellent thermal conductor and is full of properties making it endlessly useful in electronics amongst other things.

A group of scientists at The University of Nottingham with Nottingham Nanotechnology and Nanoscience Centre have etched a portrait of QEII onto the face of an old diamond, taken from a broken IR-Spectrometer mount. The portrait measures just 92 x 64 microns; around 300,000 such portraits could fit onto a single postage stamp.

The surface of the diamond was bombarded with positively charged gallium ions to chip away the surface, creating an image. As diamond doesn’t conduct electricity however, the crystal became charged and began to repel the ions. To combat this, the diamond was coated in a thin layer of carbon which was able to conduct the charge away from the portrait, but was thin enough to not affect the engraving.

In a likely attempt to better their counterparts in Nottingham, scientists at Glasgow University’s James Watt Nanofabrication Centre have created what is believed to be the world’s smallest commemorative coin, and can you guess what they’ve made it from? On a laboratory-synthesised piece of diamond, only 750 nm in diameter, they’ve produced a portrait of Her Majesty just 580 nm high—at 0.58 microns that’s nearly 200 times smaller than the Nottingham diamond. 26 trillion of these “coins” would fill a volume the size of a £1 coin.

The lab-grown diamond was covered in a polymer, and the image applied with use of high resolution electron beam lithography. The image was then transferred from the polymer to the diamond using a process known as ICP reactive ion etching.

Our next nano-artists are perhaps not quite scientists, though I felt these men deserved a special mention. Able to bewilder many nano-scientists in their ability to create work only by hand, Willard Wigan and Graham Short have created commemorative portraits just 2 mm high on a coffee bean and on the head of a pin.

Injecting Botox around his eyes to prevent nerves from twitching, and using beta-blockers to slow his heart to 30 beats per minute, Graham Short works between beats of his heart—as the pulse would destroy the engraving—to create tiny works of art.

Micro-sculptor, Willard Wigan has carved an “unusually large” micro-portrait of the Queen on to a coffee bean. Wigan often baffles medical-science in his ability to enter a meditative state, slowing his heart to work between beats, creating art works much, much smaller than this. For this piece however, Wigan used his pulse as a jackhammer to chip away at the bean.

As a final point, none of us can forget that as well as the Jubilee, 2012 also brings with it the London Olympics; and in this Jubolympic year—to steal a phrase from The BBC’s, Twenty Twelve—scientists are finding novel ways to celebrate The Olympics too. In this theme, scientists at The University of Warwick have created an entirely new molecule in celebration of the 2012 Olympics. Olympicene consists of five bonded cyclic carbon rings in an arrangement showing the Olympic logo.