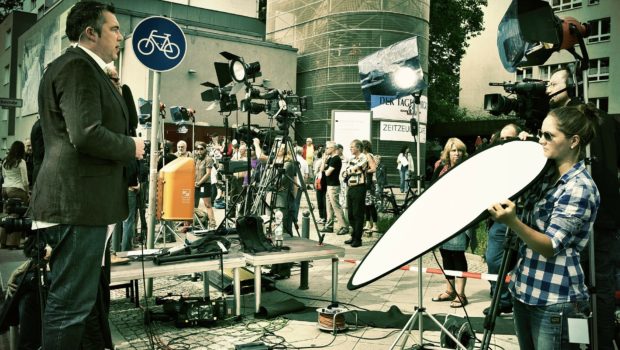 During the British Science Association’s science communication conference (#scicomm13), our Editor (@amyskinshay) was down in London joining in the discussion thanks to a bursary from the SciComm Conference folk (@scicommconf). Amy Hayward now reports on a session from Day 1 of the conference: Science on TV.

Helen actually came to Aberdeen last September as part of the British Science Festival (a post on which can be found here), and has gone from strength to strength ever since her fantastic talk on bubbles. Being an oceanographer and physicist by trade, Helen began her involvement with TV as a presenter on a subject she knows well in BBC TWO’s Operation Iceberg. From there Helen has presented The Transit of Venus, Stargazing Challenges, and worked on POP! The Science of Bubbles. Coming at science on TV from a researcher’s perspective, Helen spoke earnestly of the appeal of it to her (it’s compelling communication) and the process of making a documentary. As expected by most of the audience, the process is fairly complicated but fascinating. Helen told of how the BBC in particular are always paying attention and collating interesting topics just waiting to be released in a timely manner. Although she researches everything she says on TV (especially those things outside of her field) Helen told of how she saw TV as a useful tool but definitely not a career.

In a jovial manner the second panellist, Jill Fullerton-Smith (of Channel 4 Science), began by disagreeing with Helen. Quite clearly, Jill has made a wildly successful career out of TV and is being paid to do the thing she loves the most. “I love TV,” Jill said. “From my side of the desk, behind the camera, it’s incredibly creative. It’s like being a painter or writer. Don’t dismiss TV as something you shouldn’t watch.” It wasn’t a passion for science that drew Jill into TV, however: “I’d made films all my life, but suddenly found that if you put a little science in things the audience are drawn in. Science is feel-good TV.” On deciding what makes a show good, Jill went on to explain that unlike with generic science communication in TV there must be a story. There must be a narrative that leads us along a path. A common mistake is to make something very scientific but unpopular; seems unfair to be ruled by what is popular but it is the truth.

“Science on TV isn’t about lecturing but about telling stories and sharing world views” from the science TV panel. #scicomm13

The final panelist, John Farren, (from BBC timewatch, now director of 360 production of Youtube), went on to discuss the changing audiences for TV and film. In general, although contentious, John saw TV as a dying art. The internet is cheaper, faster, and more accepting of the heavier science. It makes for, arguably, better science engagement. “Attention loops seem to be getting shorter. The natural attention span for a documentary is probably about 40 minutes although the BBC documentaries have to be 60 minutes at the minimum.

“You can’t hope to hold sustained audience attention for that long, realistically,” John said, adding that YouTube is perfect for shorter more attention grabbing snippets. It’s also far cheaper (about 8 times) to produce something just as professional. Although the makers of TV and video science are not curators, John admitted that they have a responsibility like any other communicators. “We’ll admit our wrongs over social media”, he added.

The panel was balanced, and well chaired, although a few points from the audience particularly hit the nail on the head including the fact we may be preaching to the converted online, and the low numbers of female presenters on TV: