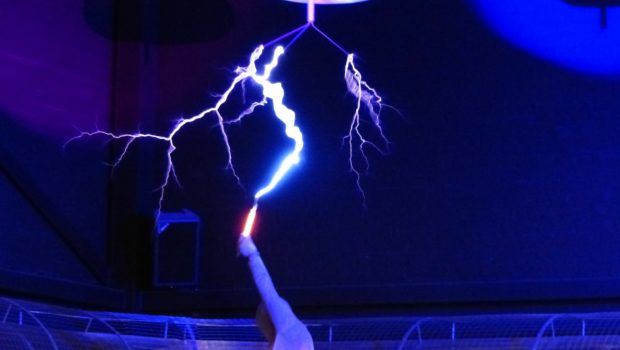 To accompany the release of Issue 7, available on campus, as a pdf, and online here, let’s a look at three of the best science-y music we’ve found online. In the issue we’ve already explored radioactive orchestras, the human voice, and electroaccoustic composition so let’s continue the tradition of the bizzare with these melodies!

1. Fiber lasers: We all know that lasers are typically used for pointing at power-point slides, battling against the sith, and the occasional science experiment. But did you know they’re also breaking into the music industry? The music is made using a 20 watt fibre laser, a stainless steel plate, and a lot of thinking. While producing the music, these lasers can engrave the metal they play against. What you’re hearing is the laser pulse rate, not the plate’s resonance. Each pulse makes a short popping sound as the metal vaporizes.

2. Tesla coils: Some might say that this music was not what the great Nikola Tesla envisioned, but we say it might be! These singing Tesla coils work by modulating spark output. Early versions of these coils used zero crossing threshold detectors as a method of producing music through their spark output.  Musical Instrument Digital Interface (MIDI) is now the most common method of music production.

Want to make your own Tesla music? So do we! You’ll need adult supervision, the ability to use a Tesla coil, and a Tesla coil. We have none of the above.

3. Floppy disk drives: In the age of cloud data, and cheap usb sticks, what is there to do with our spare floppy disk drives? We got you covered! Make sweet sweet music. The floppy music works by using the drives as a midi instrument — the stepper motor being the instrument, as it can be turned on and off many times a second (the clicking noise of it engaging and disengaging is so fast that it can form notes).

Inspired to make your own floppy music? Read more here on how it’s done. Be warned! You have to really want the music for it to happen. It’s like flying to Neverland.

That’s it for our favourite music! Do you have any grand science music you’d like to share? We only have one link left to give you and it’s the best thing you’ve ever seen.