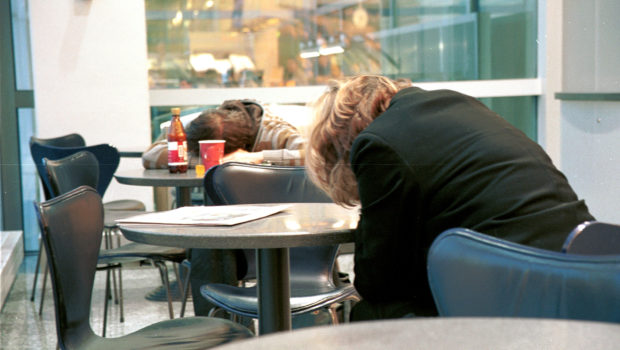 Jet lag is something of a mystery and one that still escapes the clutches of big pharma companies. Despite a number of solutions allegedly available — some distinctly dubious, like these headphones that claim to prevent jet lag by lighting up your ears — there is no way to avoid jet lag and the lethargic fog that ensues. A recent study has shed some light on the puzzle, revealing profound changes in gene expression following disruption to sleeping patterns similar to those which occur with jet lag. Jet lag is caused when the sleeping and waking cycle is out of sync with the body’s central biological clock — the molecular pacemaker which controls the circadian rhythms of the body. This clock coordinates the activity of numerous other biological clocks around the body which collectively drive the body’s daily rhythms in physiology and behaviour, including temperature and eating. It uses light to keep the internal clock in line with the environment, but it can take a while to adapt to changes in daylight hours, causing the slow adaptation to new time zones that people experience with jet lag.

Jet lag in the lab

Scientists at Surrey University simulated severe jet lag in healthy volunteers by delaying their sleep by four hours on three consecutive days, therefore shifting their sleep-wake cycle forward by 12 hours so that it became mismatched with their body clock, as occurs with jet lag. Importantly, the volunteers were not sleep deprived — the study aimed only to determine the effects of a sleeping pattern that is out of sync with the body clock. The results of the study are staggering; over 1,000 genes were found to be disrupted following the changes in sleeping routine. Genes which usually rise and fall in a regular daily pattern of activity lost their rhythm, whereas other genes which previously showed no daily changes started a new rhythm of activity. Genes affected included those involved in regulating the body clock itself, which in turn control circadian rhythms and therefore influence a number of physiological processes. These findings may explain the negative effects of jet leg, and other sleep disruptive activities such as shift work.

Jet lag and beyond

This study’s importance goes beyond long-haul flights to exotic destinations, as it is also relevant to how particular medicines work. Many drugs need to be taken at the right time of day in order to work properly, such as the cholesterol-busting drug Mevacor, which is most effective when taken at night when the levels of its target enzyme are at their highest. Similarly, this study may have implications for the treatment of diseases with an established circadian rhythm — cardiovascular disease is one such disease where daily changes in the activity of platelets in the blood mean that a blood clot is more likely to occur in the morning, causing a higher incidence of heart attacks at this time of the day. Most importantly this study demonstrates the influence of the body clock and importance of keeping all our physiological systems in the same time zone.