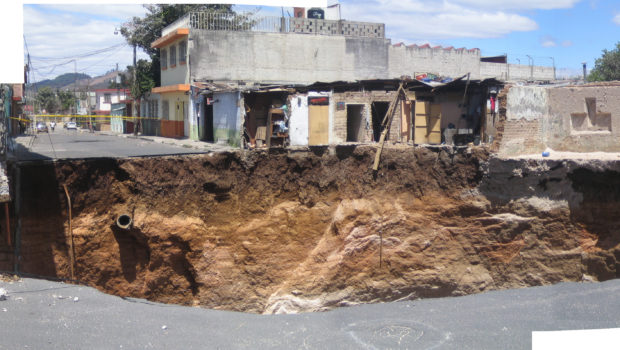 If you’ve ever had the fortune (or misfortune, depending on where you were standing) to see a sinkhole opening before your eyes then you’ll know the feeling of panic and awe as this force of nature unfolds in front of you.

Recently, sinkholes have been featuring on the news because they appear to be occurring in urban areas more frequently than ever before, and they’re swallowing up whole buildings into their dark depths. I’m sure you’ve seen the CCTV clip of a young girl in China walking down the street, only to all of a sudden disappear into a man-sized sinkhole (if not, you can watch it on YouTube here). These instances are a lot more common than they may seem, and recently the UK has started seeing its very own variety of sinkholes appearing up and down the country — the most recent close to home instance being in Edinburgh, where at 7.45pm on Tuesday 27 February 2014 a local resident driving her Corsa suddenly found herself stuck in a 2 foot wide, 8 foot deep sinkhole which had opened at that exact moment. Luckily for her, 4 students were walking past and helped her back onto solid ground.

So what is the science behind sinkholes?

In geological terms, sinkholes are depressions in the ground that have no natural external surface drainage; that is to say, when it rains, the rain stays there. It works its way into the subsurface and collects over time. In areas where the subsurface rock is made of naturally dissolving rock such as limestone, gypsum, or salt beds, the collecting water dissolves the rock, leaving behind a cavern with questionable structural integrity. Although these caverns hold for some period of time, eventually they collapse and swallow anything and everything that was on its surface.

Why are these sinkholes appearing in the UK?

Unless you’ve been hiding underground (maybe in a sinkhole cavern?) and avoiding the news you’ll have noticed the substantial volume of rain that’s been falling over the UK recently. The sheer volume of water has simply overwhelmed our usually sturdy rock beds, dissolving them and leaving behind sinkholes. Areas with large areas of dissolvable rock, known as ‘karst terrain’, are of course more susceptible to sinkholes. For example, Florida is largely formed on karst terrain, and it comes as no surprise that the number and magnitude of the sinkholes there far outweighs any of the tiny ones we’ve been experiencing in the UK.

Alison Thomson Ali is currently a PhD student at Aberdeen University researching Spinal Muscular Atrophy. When not in the lab, she can be found out and about exploring Aberdeenshire, doing a bit of photography, or most likely drinking tea. 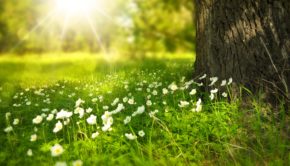 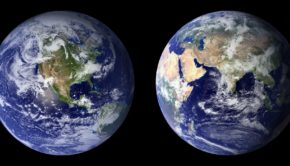 Geomagnetic Reversals: the end of the world? →