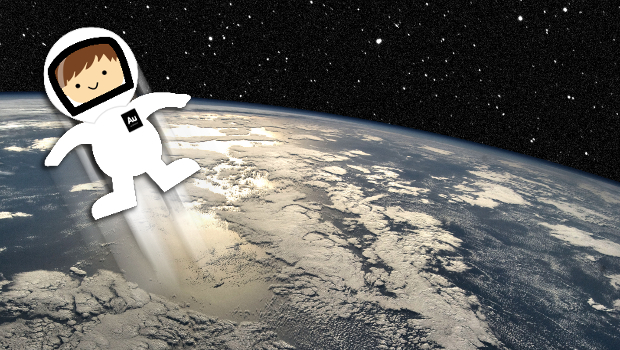 In sci-fi films we often see people being sucked out of their spaceship by holes blown in walls, but what really happens to us in space when we leave behind the essentials? As a carbon-based life form adapted to Earth’s conditions, we’re not suited to fleeing off into space armed only with the ability to fly; we need oxygen, warmth, food, drink, and of course our number one necessity: the spaceship.

The obvious answer is that they meet their demise, but I’ve investigated a little further into the science behind this. I am aware that this is a rather depressing subject for budding space travellers, so I will endeavour to keep my investigation into space-death as up-beat as possible!

Down to business: do we freeze first, or suffocate?

The lack of atmospheric pressure will cause the water in our bodies to vaporise. But we’re not dead yet…

Neither. The truth is that we actually succumb to a combination of injuries. The gases in our lungs and gastrointestinal tract expand due to the lack of external pressure on the body. “I’ll just breath out really quickly then” I hear you say. Good idea!

At the same time, the lack of atmospheric pressure will cause the water in our bodies to vaporise; i.e. we’ll start to look a little puffy as the water in our muscles and other bodily tissues expands. Not the best look in the world, but at least we’re not dead yet.

Alas, the reduced pressure also causes the nitrogen in our blood to vaporise in a condition that divers refer to as ‘the bends’. Extremely painful, and often fatal if too much vaporises at once, which in this case is all of it. We also start to realise how much we love earth’s atmosphere and the ozone layer; unfortunately here in space we have no protection from the sun’s ultraviolet rays, so we burn rapidly. Perhaps a bit more of a tan than you were hoping for.

Luckily without air or water, the heat in our body can’t leave too quickly; therefore freezing to death isn’t our top fear, despite the chilly temperatures surrounding us. Unluckily, the combination of factors I’ve already covered do not render us unconscious straight away, and instead we are left floating for about 10 seconds in a fully conscious state of extreme pain and discomfort. A prime time to contemplate our life achievements.

Due to the lack of oxygen, our lungs work in the opposite way and begin to pump oxygen out of the body leaving us hypoxic, which in turn causes loss of vision and impaired judgement. At around 10 seconds we lose consciousness and as our blood pressure drops our blood begins to boil — this is at around 90 seconds post-space exposure. At this point our hearts will stop beating and our brains will cease to function.

But at least the odds are good

So those are the causes of death in outer space, but when faced with this situation at least you can think in your last 10 seconds of consciousness “ah! I know exactly what is happening to my body” — optimistic until the end. In fact, only three of the 530 astronauts that have been into orbit have actually died in space, leaving the odds fairly positive.

Alison Thomson Ali is currently a PhD student at Aberdeen University researching Spinal Muscular Atrophy. When not in the lab, she can be found out and about exploring Aberdeenshire, doing a bit of photography, or most likely drinking tea.