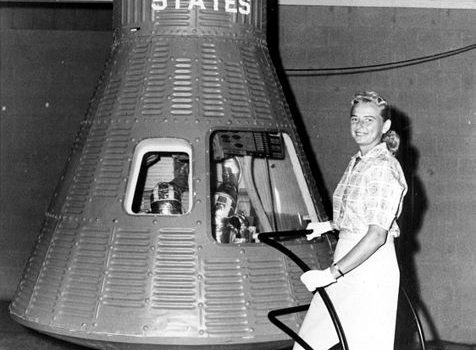 Women in Science and (almost) space

Last week we saw the celebrations of Human Space Flight, and today we’re continuing our space-related celebrations here at Au.

We thought we would do another installation of our Women in Science feature, but with a space theme! But first, I am sure most of you have seen the famous meme of Hillary Clinton… The ex US Secretary of State wanted to be an astronaut, but NASA would not let her, because American women at that time were not thought suitable for space flight. It wasn’t until 1983, a good 20 years after the first space-bound woman, Soviet Valentia Tereshkova, had made her debut in space that Sally Ride spent time outside of our atmosphere. And another 16 years until there actually was an American female pilot in space.

However, not every man in the early 60s thought women were unsuitable for piloting spacecraft. Dr William Randolph Lovelace had designed the testing procedures for male aviators in the Mercury project, aimed at beating the Soviet at sending a man to space. Space flight had not been previously achieved, so no one really knew what to expect, making these tests extremely rigorous, and only seven men made it through. Because of the average female’s more slender physique compared to the male counterpart, Dr Lovelace thought they could potentially be more suited for the cramped quarters of a spacecraft.

He set out to recruit the best female pilots he could find, and put them through the same tests as the male aviators. This was done external to the NASA space programme, with the generous funding of Jaquline Cochrane. Thirteen women eventually passed Dr Lovelace’s training, forming the Fellow Ladies Astronaut Trainees, or FLATs. In 1995 they were coined the Mercury-13, similar to the male Mercury-9 group. None of the female Mercury aviators actually made it out in space though, nor did they ever meet as a group. The first woman to pass phase I testing, Jerrie Cobb, went on to complete the subsequent phase II and phase III tests as well, thereby being equally qualified as her male colleagues. NASA’s strict rules and regulations meant that to be a space pilot you had to be a graduate of military jet test piloting programs and have an engineering degree. As all women were barred from the Air Force training schools, they were automatically disqualified as astronauts.  Public hearings before a subcommittee of the House Committee on Science and Astronautics followed, specifically to look into whether gender discrimination had taken place. Despite some of the committee members being sympathetic to the cause, no action was taken.

Jerri Cobbs’ struggle to go out to space continued a long time after the hearing. In 1999 the National Organization for Women lobbied to send her out to study the effects of ageing, similarly to the first man to orbit space, John Glenn. The effort was unsuccessful. To date approximately 60 women have made it into space.

“Never let yourself be limited by other people’s limited imagination.”

The first Briton to go out was actually a woman, and the first woman to visit Mir space station. The first African-American woman to reach orbit was Dr Mae Jemison, and put the western female’s struggle to reach space very nicely: “never let yourself be limited by other people’s limited imagination”.