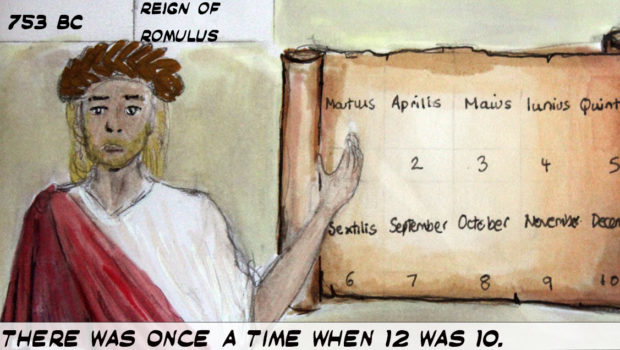 Issue 10, Ten!, has arrived. Curious about the background story for the comic? Well today artist Vanessa De Mello explains what it’s all about. A month is a period of time used to measure the natural period in relation to the cycle of the moon. In our current calendar we have 12 months in a year, either 28, 30, or 31 days, and a leap year every four years when an extra day is added in February (also a day when a female can propose in Ireland). But it hasn’t always been like this, the original Roman calendar did in fact have 10 months in year. The months began during Spring time (Martius; March), lasting for 304 days with 61 being unaccounted for winter. This calendar was thought to be invented by Romulous, the first King of Rome.

The Romulous calendar unlike any other had a strange way of numbering the days in the month. Days were divided into three lunar phases, Kalends, Nones and Ides, and were counted back in relation to the moon cycle. Kalends was the first day of the month marking the new moon cycle, and accounted for the longest time in a month. The Nones period represented the half moon, typically lasting 8 days. Here a Pontifex (priest) would be the person in charge in informing how many days there would be in each month. He would observe the sky every night and upon seeing a lunar crescent would calculate the days before the next phase. Imagine trying to look for the moon here in Aberdeen, behind the thick grey clouds time would be endless.

The final phase was known as Ides, marking full moon, and occurred on the 15th March, May, July and October and 13th day in the other months (fun fact: the Ides of March was the day Julius Caesar was assassinated). Days were counted chronologically from the closest lunar phase — for example, May the 13th would be ‘three Ides’ — counting Ides as the first. The day before any of these three lunar phases was know as Pridie. So, going on this it’s quite safe to say our seven-day weeks are definitely less intense.

But as you all know well this calendar did not last long as it was reformed by Romulus’ successor Numa Pompilius around 700 BCE, to include January and February. And then followed by the Julian Calendar, introduced during the reign of Julius Ceasar. Each year consists of 365 days, divided into 12 months, with a leap year every fourth year. The Roman calendar only held 355 days a year, so the Julian calendar added a 10 days spread out over the year. The length of the month decided at that stage is still the length of the month today. It held on to the same way of dividing the days using the lunar phases from the older calendars.

Our calendar: the Gregorian

The Julian calendar was exchanged for the Gregorian calendar in 1582, which we use in the Western world today. The Julian calendar did not take into account that the tropical year was somewhat shorter than the prescribed 365.25 days, leading to a slight drift in the dates of the spring equinox. This was deemed undesirable by the church, as the dates for Easter is calculated from the spring equinox, hence the need for a calendar reform. Since then the way we measure our days have remained pretty much intact… Of course, now with all ‘modern’ technology (think watches and such) there is no longer a need for a priest counting out the days to keep us on track. But perhaps it would be a nice app to have?

Vanessa De Mello Vanessa is a PhD student in the Musculoskeletal group at the University of Aberdeen, and works on the Hippo pathway in muscle stem cells. When out of the lab she likes to draw and sometimes sing. 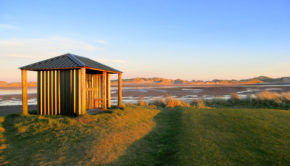 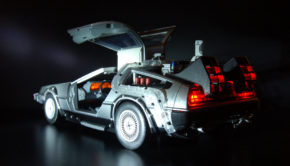 Looking Back to the Future → 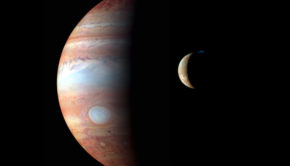 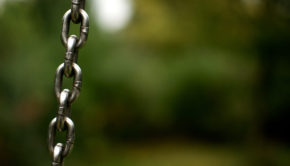