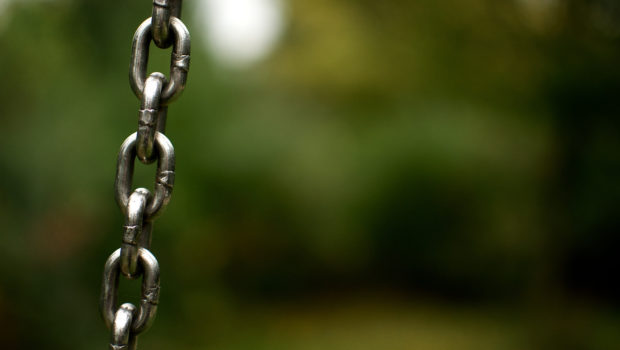 Welcome back for the second instalment of Payne’s Chain Reaction! This is a quiz with a difference; each answer links to the next forming a chain which can provide clues to any questions you get stuck on. The links range from as obvious as a shared word to more obscure facts and play-on-words. Finally, in the spirit of scientific research, collaboration is encouraged!

1. In which Microsoft Windows game are Pauline, Michele and Ben your default opponents?

+ answer
Hearts
+ link
The heart is an organ

3. What geological term is given to a political victory in which one candidate or party receives an overwhelming majority of the votes?

+ answer
Landslide
+ link
Roundabouts and slides are both found in parks

4. For which band did John Pasche designed the famous “Tongue and Lip Design” logo in 1971?

5. Which 2003 film sees Dewey Finn (Jack Black) pose as a teacher and enter his class into Battle of the Bands?

6. What is the name of the aperture formed by the iris?

7. What type of lemur fills the same ecological niche as a woodpecker using its long, thin middle finger?

+ answer
Aye-aye
+ link
The pupil is found in the eye

8. Who is the archenemy of Peter Pan?

9. Which J.D. Salinger novel of 1951 has sold over 65 million copies which its protagonist, Holden Caulfield, becoming an icon for American teenage rebellion?

+ answer
The Catcher in the Rye
+ link
Hook and catch

10. Manna, supposedly given to the Israelites by God, is a type of what staple food?

+ answer
Sandwich
+ link
Bread is a key constituent of a sandwich

12. If Paris has a “Metro” and London has an “Underground”, what does New York have?

16. What drinking game is won by the first team whose members have sequentially consumed their beverages?

17. What is “prosopagnosia” an inability to recognise?

18. Who has appeared on the cover of “Sport Illustrated Swimsuit Issue” a record five times?

19. Created by Tyra Banks, which reality television programme is sometimes abbreviated to “BNTM”?

20. In the 2007 film “Hot Fuzz” where does lead character and exceptional policeman, Nicholas Angel (Simon Pegg), get told to go if he wants to be “a big cop in a small town”?