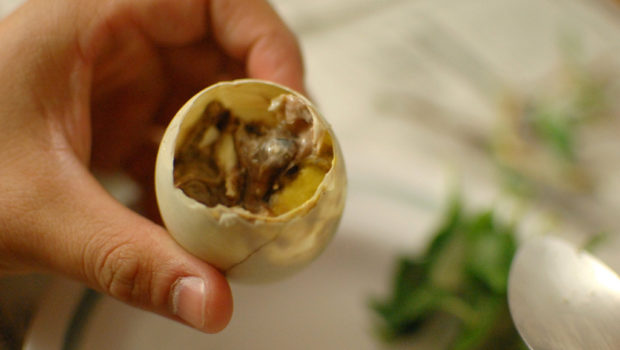 Weird foods of the world

Christina Nikolova takes a culinary tour around the globe.

Here you are! Exams are finally over — well, for those who have passed them at the first time — and summer is theoretically here, though not so much in Aberdeen. For this reason you start planning your long awaited and well deserved holiday somewhere hot, sunny and basically HOT!

No matter what is the purpose of your holiday, food is always important part of it. Every country is famous for its culture, historical monuments, museums, nature and wildlife, and of course for its food. This may already spark a light in your mind. You just remembered that fantastic seafood paella you ate last summer in South Spain or that amazing couscous you tried on that surf trip in Morocco last year. But there are some really weird traditional foods in some countries.

Here I am going to introduce you to some of the most unusual and in my opinion very interesting food choices. So if you are going to any of the following countries to spend your holiday, definitely try some of these dishes and when you are back please share your experience with us. We (especially me) are very keen to learn more about the taste of these foods. So brace yourself and prepare some tissues to absorb the dripping saliva from your mouth! Literally.

If you are an ant fan, that is the dish for you to try. Escamoles are the larvae of a venomous ant species of the genus Liometopum. These ants lay their eggs deep down in the roots of agave or maguey plants in Mexico and, as you can imagine, harvesting them is not the most pleasant job in the world. In some parts of Mexico, escamoles are considered a delicacy and are sometimes referred to as “insect caviar”. The larvae are said to have a consistency akin to cottage cheese and a buttery nutty taste. Sounds good, doesn’t it? The most common way to eat escamoles is as a filling in a Taco or omelette.

Shirako means “white children”. No, it is not what you think. The Japanese do not eat kids, at least not human ones. Shirako refers to the sperm sacs of cod, anglerfish or puffer fish. If you are already enticed, shirako looks like white blobs of goo or miniature brains and is said to have a sweet custard-like taste. It is a delicacy in Japan and as such it is extremely bad mannered not to eat it when given to you, especially if you are in a host family during your travels. So swallow your pride and try not to gag in front of everybody. I don’t see why you would do that anyway!

Now, I must warn you before you carry on reading to make sure there are no children or other people that may get upset with the following information. And if you are a baby duck lover yourself, just skip this paragraph and go on with the next one. You have been warned! Balut is a fertilised duck egg that has been boiled alive with its partially developed embryo inside. It is commonly sold as a street food and is eaten from the shell with salt, chilli and vinegar. For only twenty Philippine pesos (£ 0.30) you can enjoy this culinary masterpiece which can also be found in Laos, Cambodia and Vietnam. How exactly do you eat this, you ask. Well, you are supposed to tap a hole on the top of the shell, sup the savoury liquid and then chomp on the rest of what’s inside — including the feathers and bones.

While on your trek through the Cambodian jungle, don’t forget to try the very popular deep fried tarantulas. Originally eaten by Cambodians starving under the Khmer Rouge regime, now the crispy spiders are a common snack served throughout the country. Tarantulas are widely spread in this part of the world so don’t be surprised. Just go on and try them. Apparently they taste a bit like crab and are a good source of protein.

Yes, that’s right, moose nose in jelly. And why not? Just think about it. You take the nose of the poor moose you hunted down, boil it up with onions and spices, remove the hair, boil again, then slice and cover it with a broth that sets into a jelly. The perfect appetiser, I would say! In fact, jellied moose nose is something completely normal in northern Canada and Alaska. If you feel adventurous enough, try it; there are a few good recipes in the web.

This hard-to-pronounce word means “sleeping excrement” from Aztec and refers to a corn smut. Corn smut is a pathogenic fungus, Ustilagos maydis, that turns the normal corn kernels into tumour-like growths in blue-black spores. Huitlacoche is a culinary speciality in Mexico and is a popular filling for tacos and quesadillas. The fungus causes the woody, earthy flavour of the corn, and in fact the infected corn is a better source of protein than the normal one.

You are passing through the Gobi desert in Mongolia and the scorching heat makes you think about something cold and fizzy. Can’t find a bar? Do not worry! It is very likely that you would meet friendly local people who offer you that cold and fizzy drink. No, it is not a beer, but will it have the same effect? Airag is fermented horse milk and is also known by its Russian name “kymus’. The fermentation is caused by a combination of lactic acid, bacteria and yeast. The milk is led to ferment into a fizzy, slightly alcoholic (up to 8%) liquid which is offered to guests of local people.

Italy is mostly famous for its pizzas, pasta and gelato, but casu marzu is something special. It originates from Sardinia and is a Pecorino cheese with maggots for additional flavour. At first, I thought that this may be a joke. Who on earth would eat a cheese with maggots? It turned out that it is a very popular delicacy and common in Sardinia. The cheese is left to rot with the help of the larvae of cheese fly (Piophila casei) which hatch inside, burrow around and digest the fats. As you can imagine the result is as bad as it sounds — a weeping, tongue-burning cheese delicacy that you can enjoy with or without the maggots. Mmm, tasty!

Muktuk is a traditional Inuit meal of frozen whale skin and blubber and is served either raw or pickled. It is usually made of bowhead whales, however, beluga and narwal is not unlikely either. Muktuk has several layers: the skin, the fat and the protective layer (blubber) in between. This meal is very chewy, hence, if you have dentures, do not eat it! The whale skin is a very good source of vitamin C, the epidermis contains up to 38mg per 100 grams. The blubber is rich in vitamin D (essential in northern latitudes) and omega-3 and -6 fatty acids.

When you think the weird foods of the world can’t get any weirder, you learn about the Hakarl. It is prepared from gutted and beheaded Greenland shark, Somniosus microcephalis. The meat of the shark is left to rot in a shallow grave covered with sand and stones for two to three months, then cut into strips and dried for several more months before serving. The Greenland shark’s meat is poisonous due to the high content of urea and the neurotoxin trimethylamine oxide which, upon digestion, breaks down into trimethylamine producing effects similar to extreme drunkenness. Allowing the shark to fully ferment and cure removes retained uric acid from flesh, making it edible. Even though it is safe to eat, the smell is extraordinary strong and most likely will make you to gag.