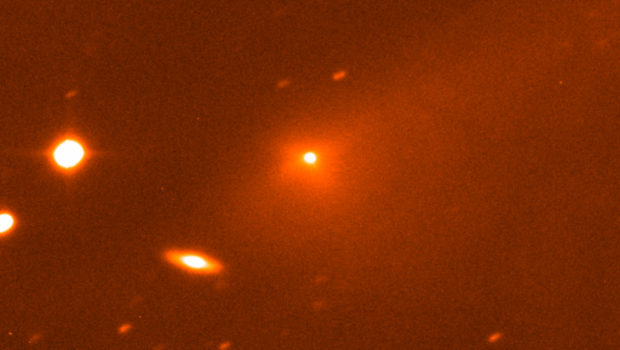 Christina Nikolova takes us on an adventure through space.

Today (28th November 2014) is the 114th day of the most significant and first space mission of its kind undertaken by humans. The Rosetta mission is special because it started 10 years ago with the only aim to deploy a research lander on a comet’s surface. Yes, on a moving comet, big enough to destroy our planet in a possible impact. Don’t panic now! This event is very unlikely. Or, at least, that is what they say. Anyway, in the worst case scenario Bruce Willis and company will save us! The comet in question is called 67P/Churyumov-Gerasimenko and it is 511 million km away from us. You may ask why on earth why people have spent so much effort and money to land a piece of highly sophisticated technology on a comet so far away. That’s a very valid question, the answer of which is pretty valid too.

The Rosetta spacecraft is the result of collaboration between European Space Agency (ESA) and NASA. Rosetta’s Philae lander made physical contact with 67P on 12th November, and since then has sent pictures of the comet’s surface never seen before. Different scientific data is being collected as well. Sediment samples, rock samples, gas samples — everything is collected with the only hope to find out what has puzzled scientists for decades: did life on Earth come from space with the help of comets?

So what is a comet?

Comets are small Solar System bodies composed of a combination of rock, dust, water ice, and frozen gases such as methane, ammonia, carbon dioxide, and carbon monoxide. Comets are the leftovers from the formation of planets in our Solar system and are believed to be up to 4.6 billion years old. Landing a robot on their surface could help us to understand how the planets were formed and, most importantly, how life on Earth began.

Rosetta and Philae will stay with the comet until it reaches the perihelion, the closest point to the sun in the comet’s orbit. When a comet approaches the sun, its icy body starts melting and produces what is known as a coma. A coma is actually the famous “tail” of the comet and is visible even without a telescope. This would be the most important part of the mission as Philae will be able to collect valuable samples from the evaporating gases.

Philae has already detected organic compounds containing carbon, but it is not confirmed which molecules and how complex they are. What interests scientists most is whether the comet contains “left- and right-handed” amino acids considered to be the primitive basis of all proteins on our planet. If these amino acids were found, that would mean that life on Earth could have been brought from space.

“Science will now take front seat in this great mission. It’s why we are there in the first place!” — Matt Taylor, Rosetta Project Scientist

The analysis of all data collected during Rosetta mission will take more than a year. But once it is done we will be one step closer to solving the mystery of the origin of life on our planet. And who knows what else is there to be discovered!