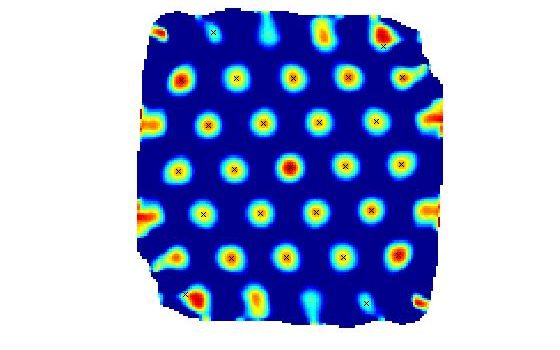 The cartographers of our brain

This year’s Noble Prize of Medicine or Physiology went to Dr John M. O’Keefe, Dr May-Britt Moser, and Dr Edvard I. Moser “for their discoveries of cells that constitute a positioning system in the brain”. FIGURE 1: Activity of a grid cell in a rat by Torkel Hafting at Wikimedia Commons (CC-BY-SA-3.0).

Furthermore, most of the input to the hippocampus comes from the entorhinal cortex, which led to the Mosers studying this part of the brain in order to figure out the mechanism that fired place cells. They found out that the neurons in the entorhinal cortex were activated when the rats moved through a particular spot in the room, but couldn’t figure out the reason why these spots in space were so special. Nevertheless, the Mosers realized that making the room bigger would allow them to visualize the marks more clearly, and they were astonished with the results: the spots matched the vertices of hexagons, (as you can see in Figure 1) and the reason for them not having been able to see this pattern was that, in a small box, the spots would overlap each other.

The reason for the hexagonal pattern is that grid cells — as they called them — in the same area of the entorhinal cortex fire with the same spacing but different phasing, something you’ll understand very quickly if you have ever worked with polar coordinates or simply with a compass: the distance from the needle point to the pencil lead is fixed (“spacing”), and the only thing that varies is the angle (“phasing”). This way, several equidistant points with a constant difference in phasing will form a polygonal pattern.

“It was so unexpected that the brain would use the same simple geometric forms that we have been describing in mathematics for millennia.” — May-Britt and Edvard Moser

In practise, grid cells allow us to establish our own coordinates of the places we are in — like a grid on a piece of graph paper that lets us perceive relative positions between one object and another by counting the squares in it.

Do you know your brain’s language?

The importance of these discoveries is self evident: the fact that our brains have their own language — just like how a webpage is described in HTML or a computer elaborates commands in binary — has opened a new way to approach to the study of the organs that define the human experience.

Laura Toyos is a Guest Author. Our guest authors write articles for us on a wide range of topics and come from a diverse variety of backgrounds. If you would like to write for us then head over to our Get Involved section to find out more or get in touch via email.