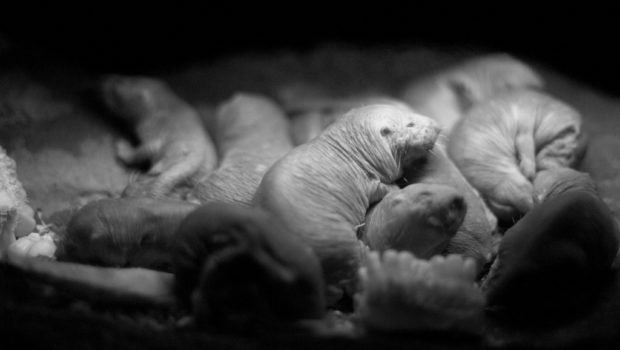 There is mole than meets the eye

The unique appearance of these creatures may provoke some surprised looks.

While not the most aesthetic of animals, the naked mole rat (Heterocephalus glaber) has captivated the scientific community during recent years. Among its appealing features are record-breaking longevity and cancer resistance. These exciting adaptations earned the naked mole rat the “Vertebrate of the Year” award in 2013 from Science, a prestigious scientific journal. Our editor Luis Jose Perez Calderon tells us about why these little animals are deserving of such an honour. The unique appearance of these creatures may provoke some surprised looks. They are hairless, near-blind rodents with protruding teeth, but nature is wise and the looks of the naked mole rat can be explained by their particular way of life. These creatures live underground and dig through tunnels; they are bald due to the hot air of their natural East Africa environment. However, should they ever feel chilly they will cuddle together and share body heat. They are near-blind because no light reaches their underground habitat, and to make up for it they have a great sense of touch and smell. They use their protruding teeth to dig tunnels which can form networks over two miles long!

The tunnels of youth

Their surprising longevity (about 30 years) is a record among rodents.

Their surprising longevity (about 30 years) is a record among rodents; a mouse of the same size lives for about four years. The scientific community is curious as to why this is and if there are possible clues on how to delay ageing in humans. A study published earlier this year on BBA (Biochimica et Biophysica Acta) by a research group from the University of Texas (San Antonio) discovered a robust protein management system in the animal’s cells that keeps their cells healthier for longer. A better understanding of how this system works could provide clues to enhanced longevity in humans. Will these beautiful creatures be humanity’s ticket to immortality? Time will tell.

Cancer-proofing is achieved through the delivery of a special hyaluronan to its skin, present in other rodents and humans.

Cancer immunity is another superpower of the naked mole rat. While this had been known for some time, a study conducted by a research group from the University of Rochester (New York) described a mechanism used by the naked mole rat against skin tumours. Cancer-proofing is achieved through the delivery of a special hyaluronan to its skin (HMW-HA). Hyaluronan is a molecule that  provides the naked mole rat with extra-flexible skin so that it can move through tunnel networks with ease. It is a polysaccharide (sugar-ring) present in other rodents and humans as well. However, the type used by naked mole rats is fivefold larger than the corresponding human one and this may be one of the reasons  why they are cancer-free. The secretion of HMW-HA slows down metastasis (the spreading of cancer cells) by preventing cell overcrowding. As with the anti-ageing mechanism, researchers hope there is high potential to develop cancer treatments with the help of these little animals. Additionally, the naked mole rats have other features that aid in tumour suppression and this will likely be a focus of research in years to come.

Vertebrate of the century?

Despite not being very pretty on the outside, the singular adaptations of the naked mole rat to live underground have also granted it bonus adaptations to longevity and cancer immunity. This makes them very important to medical research on anti-ageing and cancer treatment. Who knows what vertebrate will be named “Vertebrate of the Year” for 2014? Will it surpass the naked mole rat?

Luis Jose Perez Calderon I'm a PhD student at the University of Aberdeen studying deep sea oil spills and hydrocarbon entrainment in marine sediments in a biogeochemical context. This basically means that I get to play with oil and sand.