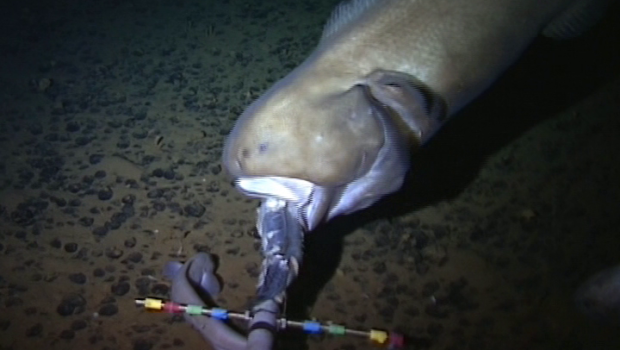 The Deepest of the Deep

Christina Nikolova is taking us on a deep sea tour to find out about the mysterious critters that live there. You may have heard about this already (it was big thing on the news last month); but if not, here it is! The deepest fish ever found has been observed in the Mariana Trench, at a depth of 8,145m. The Mariana Trench is located in the West Pacific Ocean and is the deepest known point in the oceans reaching a depth of 10,911m. That is more than 4,500m deeper than the deepest land trench, Nepal’s Kali Ghandaki Gorge, and makes the North Sea’s average depth of 95m and maximum depth of around 700m look quite shallow in comparison.

What do we know?

Why, you ask, should we make so much noise about it? Well, it is quite astonishing that something lives that deep to begin with! The discovery itself was made by the University of Aberdeen’s well-known deep-sea researcher Dr Alan Jamieson, based at OceanLab, and his international team. Snailfish: deeper than the deepest

During their expedition to the deepest trench in the world, Dr Jamieson’s team managed to collect 100 hours of footage of deep-sea fish, some of which never seen before, at depths between 5,000 and 10,600m. And then, at 8,145m below the sea surface, a small fish swims in and leaves everyone on the surface breathless. This mysterious fish happens to be a new species of an already known group of deep-sea fishes — the snailfish (Figure 1) — and the deepest ever seen alive! The previous record for the deepest fish was again for snailfish, Pseudoliparis amblystomopsis, discovered by Alan Jamieson’s team in the Japan Trench at 7,700m.

“Pretty sure it is a snailfish but doesn’t resemble any snailfish species we, or anyone else, have seen before.” — Alan Jamieson

Jamieson describes the “new” deepest fish (Figure 2) as “incredibly fragile with long pectoral fins resembling angel wings”. It has length of 20–25cm and swims slowly, which is typical for most deep-sea fish. Another interesting fact is that the fish was only found between 7,900 and 8,145m. This depth range is very narrow in terms of ecological niche adaptations. There is a limit of how deep a fish can live and this little fellow is right at the edge. Figure 2: Deep sea amphipods feeding on the bait and the deepest fish at the bottom left corner. Photo by Alan Jamieson. Adapting to life at the bottom of the sea

Deep-sea fish have evolved differently from fish from shallower waters in terms of their physiological adaptations corresponding to their environment. For example, below 1,000m complete darkness, enormous pressure, sub-zero temperatures, and scarce food sources have determined the lifestyle of deep-sea creatures. As the lack of light, temperature and to some extent food availability stay more or less constant, pressure increases greatly with depth. In fact, for every 10m water depth, the pressure increases with one atmosphere (atm). This means that the deepest fish experience pressure of 808 atm. This equals to put the weight of 808kg, or an adult Wild Asian Water Buffalo to be totally random, on your thumbnail!

To cope with such high pressure, deep-sea fish produce a substance called osmolyte, which basically helps their cells not to burst under the high pressure. The deeper you go, the more of this substance you produce. However, theoretically, below 8,200m a fish cannot produce more osmolyte and is very likely that it would just explode. But as I like to say sometimes, you never know until you see it! What other surprises could lie beneath the waves?