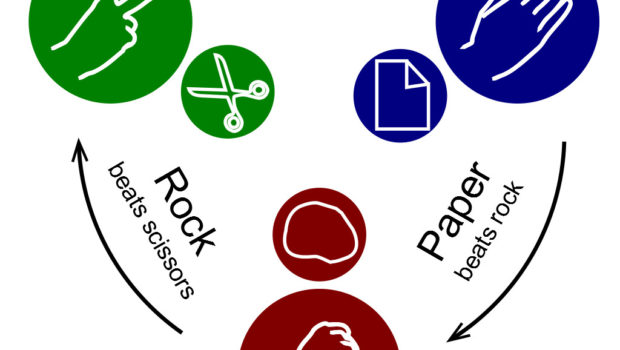 Finding yourself in a game of Rock-Paper-Scissors (RPS) is not uncommon and can be nerve-wracking if the game is lost. So on that note, here we’ll provide you with some history and trivia on the age-old game and an optimal strategy to maximise your chances of winning.

RPS is thought to have originated in China over 2000 years ago and there are references of the game in Japan under the name of “mushi-ken”. The game involved the same set of rules (i.e. three actions with non-transitive dominance relations) but used animals (frog, slug and snake) instead of the contemporary stationary material and geological solids. Textual evidence of its arrival to the west is controversial and hypotheses of games created in Europe of equal mechanics are subject to debate (Scandinavian, French, Celtic, etc.).

It’s all about strategy.

A team of Chinese researchers published a study aiming to determine human behavioural strategies towards zero-sum (gains of one participant are balanced by the losses of the other) games such as RPS. There is debate as to what mathematical approach best describes the RPS game system. This debate is limited by a lack of real life scenarios analysed and that is where this research project comes in. An experiment was conducted in which 360 students from the Zhejiang University participated in tournaments of RPS. The students were then paired to play 300 games of RPS (yes, three hundred), which took between 1.5 and 3 hours. To incentivise competitiveness, students were paid in cash a proportional amount to their victories achieved (who would go through such torture otherwise?).

Are our choices as random as we think? If you were to have RPS matches against a computer, there is no strategy other than playing rock, paper or scissors at random. However, humans display irrational behaviour when it comes to games of chance. The results revealed interesting patterns, which can be applied in real life RPS scenarios and give you better odds in competition. In a first instance, if a match outcome was favourable (i.e. victory), the typical strategy that most students followed was to repeat the same move, if you win with scissors, you will most likely win again if you use scissors, right? No. Secondly, if a match outcome was unfavourable (i.e. defeat), most students changed their choice for the next round.

Hopefully this has broadened your understanding of random chance games and will make you a likely winner of future RPS games. If you come up with better strategies, please do let us know as we too want to maximise our chances of winning at RPS!

Luis Jose Perez Calderon I'm a PhD student at the University of Aberdeen studying deep sea oil spills and hydrocarbon entrainment in marine sediments in a biogeochemical context. This basically means that I get to play with oil and sand.