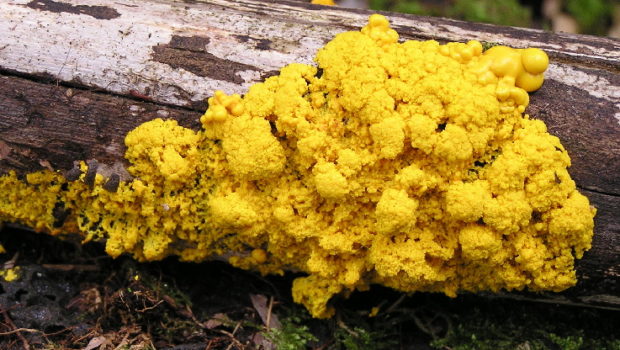 Network theory: the role of slime mould in the distribution of wealth

A yellow blob that likes porridge. This is how the humble slime mould appears to the naked human eye. But what scientific problems could this organism help us to understand?

To start with, the term slime mould is quite a misleading one, as this organism actually belongs to the kingdom of amoeba. This means that it is not a multicellular organism (like moulds) but a single-celled one in which cells join together forming a mass that operates as one entity with the objective of maximising resources. If we were to observe it, as Heather Barnett, the founder of slimemo.org did when she took it home for the first time, we would see that it forages for patchily distributed food sources. Building upon this characteristic, researchers led by Nakagaki at the Future University Hakodate in northern Japan found that, when porridge was placed following the pattern of railway stations, slime mould replicated the Tokyo transport network. However, mapping territory is not the slime mould’s only skill; it also knows itself, as it retreats back when it crosses its own path. This way, slime mould — though simple-looking — has been considered to have the attributes necessary to recreate ‘intelligence’.

However, how can the systems that this organism builds in order to survive have the same configurations that humans have designed taking into account complex socio-economic and geographical inputs? A network can be defined as a set of nodes connected to each other, in very simplistic terms. In modern societies, we constantly face the problem of building transport networks that excel in performance, cost-efficiency and fault resistance. At the same time, the Physarum polycephalum (which is the species that the term ‘slime mould’ refers to) has been proven to be able to establish the shortest and most efficient route through different nodes while being able to learn from external stimuli. This was proven by the same Japanese team of researchers as slime mould was exposed to cold air in periodic intervals: the amoeba retreated, which, in first instance, would make sense, as it is a living organism that likes it hot and damp (in the words of Barnett) and it reacts to external stimuli. However, once the stimuli was removed, the slime retreated at the predicted time, meaning it was anticipating the event which used to happen periodically. The ability of this organism to learn and map its environment have placed it in the spotlight of network design. The behaviour of slime mould is being computerised, recorded and modelled digitally — having showed that, from power grids to financial systems, all could be optimised by the so-called slime mould. These systems and systems like them need to continuously update, adapting to their environment, and balance the cost of producing an efficient network with the cost of failing in a competitive scenario.

Nevertheless, the fairness and quality of a network depends on how each node is connected to each other. There are two types of network depending on how each node benefits from its connections: meritocratic, where individuals get compensated according to their merits; and topocratic, where individuals get compensated according to their position in a network (from the greek tópos for location). Moreover, mathematicians at MIT in the U.S. and Universidad Autonoma de Madrid in Spain have developed a mathematical model where individuals produce content and distribute, not only theirs, but also their closest neighbour’s, in exchange for a profit. The results concluded that, in a strongly connected network, each individual is more capable of selling their own product and reward is more meritocratic. Furthermore, they calculated the threshold separating a topocratic society from becoming a meritocratic one, and concluded that, for this transition to happen, there must be a maximum of two agents between the producer node and the buyer. This way, the traditional belief that there are six degrees of separation between any two persons in the planet would imply a strong topocratic character of our society. On the other hand, the authors pointed out that the existence of the internet, as it allows individuals to commerce through single intermediaries like eBay, Amazon or iTunes, plays a major role in the promotion of meritocracy in our society — reducing long chains of intermediaries, which are typical of the poorly connected topocratic societies. Barnett, who has just recently released a documentary titled The Creeping Garden about this organism, affirms that it actually serves as a metaphor for social communication, involving the creation of workshops were people learn about slime mould; and a symbol for cooperation, with artists like Blaine O’Neill enhancing activities like community mapping in New York with the help of this amoeba. Be as it may, the slime mould has paved the way for various research paths that still ought to be explored.

So, every time you have to take two coach transfers to go home, think about how slime mould could possibly make it better.

Laura Machado is an undergraduate student in Chemistry with Physics at the University of Aberdeen (and Editor-in-Chief of the magazine). She likes reading, listening to music and writing vague biographical descriptions of herself.