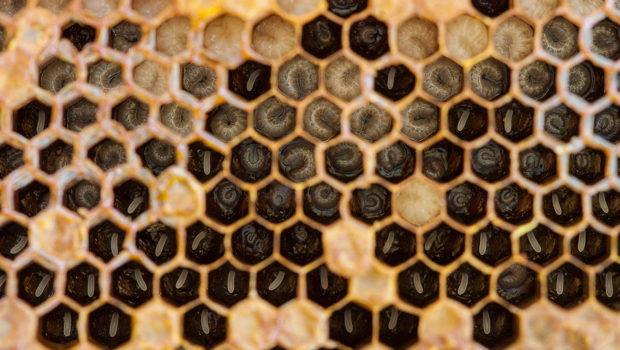 The SMARTBEES project: sustaining the future of the honey bee

This is a taster of an article in our EXPLORATHON issue. Click here to read the full issue online.

Honey bees in Europe are now under threat due to pesticides usage, changes in agricultural practices and pests. The result is a frequent loss of a third of bee populations across the continent in winter. One third of our food supply depends on insect pollination and honey bees are the most widely managed insects to assist in crop pollination, highlighting the importance of saving them.

When the varroa mite feeds on the bee, it passes immunosuppressants and viruses from its saliva into the bee. One such virus, the deformed wing virus, has lived in benign equilibrium with the bee for thousands of years. This, however, changed when the varroa mite arrived in Europe as, when the virus is passed from the bee back to the mite, it alters genetically to survive in the mite. The new viral form becomes pathogenic to the bee when it is reinfected, as it has lost its compatibility with the bee. It is thought that, without intervention, a hive of bees could die within 2 years of infection. Varroa destructor on the head of an emerging bee by Gilles San Martin (CC BY-SA 2.0) at Flickr.

There are very few pesticides which target varroa without affecting the bee and the varroa mite has already developed resistance to these pesticides. The SmartBees project aims to tackle the problem in Europe by breeding honey bees which are resistant to the varroa mite.

By exploiting a natural behaviour of the bees, hives containing resistant bees are identified. If varroa infects a honey bee brood cell, bees detect this through smell and discard the infected pupae. These bees are said to show resistance to the varroa mite. To find out whether a hive contains bees that express this behaviour, liquid nitrogen is used to damage the larvae and the number of discarded larvae is recorded. Hives which present resistant behaviour will then be selected for breeding.

SmartBees, however, does not plan to breed from one varroa resistant queen bee to provide colonies for the whole of Europe, as this would lead to low levels of genetic diversity. Therefore, the project is looking for genetic markers of resistance within bee populations, in each country by using next generation DNA sequencing on small samples from bee wings. Breeding for resistance will then take place within each European country.

The SmartBees project endeavours to conserve bee populations in a sustainable way without further use of harmful pesticides. Healthy bee populations mean that we will continue to enjoy the great variety of plant products we use every day.

Elizabeth Hay is a PhD student in the Translational Neuroscience group at the Institute of Medical Sciences.