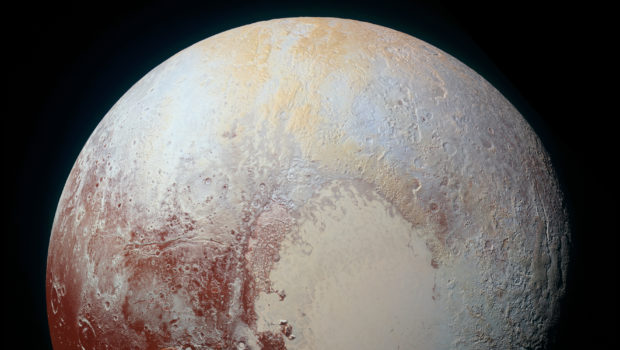 What do we know about the last planet in the solar system? As of two months ago, not much at all. We knew it was very small and far, far away, and that is was supposed to be a “dead” icy world. However, on July 14 an extraordinary space mission that took 10 years to reach the dwarf planet revealed much more than that. Picture 1: The size of Pluto and its biggest moon, Charon, compared to the Earth. Image: NASA.

The dwarf planet is called Pluto after the Roman god of the underworld. Appropriate, isn’t it? Pluto’s existence was known as early as the 1840’s when astronomers’ calculus suggested that at least one large ice giant (called then Planet X) is orbiting the Sun at the very edge of the solar system, beyond Neptune and Uranus. However, its actual physical existence was not discovered until almost a century later.

In 1930 the American astronomer Clyde Tombaugh found the Planet X, later called Pluto, after almost a year searching for a moving black spot on a series of photographs of the night skies taken several days apart. A moving spot would mean that he had found a moving object among non-moving stars; possibly a planet.

Was it a planet?

There was a problem. The newly found planet was so small that even the best telescopes of the day could not focus on it. Disappointingly, Pluto turned out not to be the predicted ice giant that everyone expected to find. In fact, Pluto has a diameter of only about 1,470 miles (2,380 km) compared to the Earth’s 7,900 miles (Picture 1). To be considered a “planet”, Pluto, and any other space object, has to meet three conditions:

Pluto fails to meet the third condition, because its mass is only 0.07 times that of the mass of other objects in its orbit. Therefore, in 2006 the International Astronomical Union declared Pluto an ice dwarf planet.

Ice dwarfs: the lego bricks of the universe

Ice dwarf planets are the left overs from the formation of the Solar system, and are mainly found in the Kuiper Belt, the outer zone of the Solar system about 30-50 AU (Astronomical Units) from the Sun. The ice dwarfs are also believed to be the building blocks of the larger planets in our solar system. As such these small icy objects can teach us a great deal about planetary formation.

“Instead of a dead world fully covered by craters and ice, evidence of recent geological activity could be found.”

NASA’s spacecraft ‘New Horizons’ was launched on 19 January 2006 with one-way destination Pluto. On 14 July 2015, after almost 10 years of epic space journey to the end of the Solar system, New Horizons reached its target. The spacecraft was designed and integrated at the John Hopkins University Applied Physics Laboratory in Laurel, Maryland, USA.

New Horizon is a state-of-art piece of technology equipped with seven instruments designed to investigate the global geology, surface composition and temperature, and the atmospheric pressure, temperature and escape rate of Pluto and its moons. Researchers had big hopes for New Horizon’s success but what the spacecraft had found surprised everyone. Instead of a dead world fully covered by craters and ice, evidence of recent geological activity could be found in some parts of the small planet; like the Sputnik Planum in the heart-shaped Tombaugh Region (Picture 4). This region has zero craters on its surface and what seems like floating ices similar to Earth’s glaciers. Pluto’s ices, however, are made of nitrogen, methane and carbon monoxide (Picture 2).

Another surprising discovery is images of what appears to be mountains rising as high as 3,500m. Scientists believe that these mountains have formed no more than 100 million years ago and are made of water-ice, which at Pluto’s temperatures behaves like rocks (Picture 3). This is exciting given the 4.56 billion-year age of the solar system and Pluto itself! Clear evidence of geological activity. But could something else have caused the rising of mountains on Pluto? There are not any large planetary bodies to heat Pluto by gravitational interactions and hence the formation of mountainous structures like those seen on some ice moons of the giant planets (Jupiter, Saturn, Uranus and Neptune). Therefore, some other process, most likely some kind of geology, must be generating this landscape. Hazes as high as 80 miles (130km) above Pluto’s surface were also observed by New Horizon’s spacecraft. Hazes are a key element in creating the complex hydrocarbon compounds that give Pluto’s surface its reddish hue. Atmospheric models suggest the hazes form when ultraviolet sunlight breaks up methane gas particles, which is found in Pluto’s atmosphere. The breakdown of methane triggers the build up of more complex hydrocarbon gases, such as ethylene and acetylene also discovered in Pluto’s atmosphere.

No doubt, New Horizon has helped us to see a distant and unknown worlds in a way that no one has ever imagined. Every single byte of information sent back to Earth by the spacecraft is a huge achievement of science and technology. And Pluto is not just a cold and dead dwarf planet any more but rather another fascinating piece of evidence of the complexity of the universe. 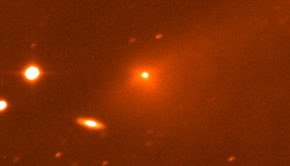