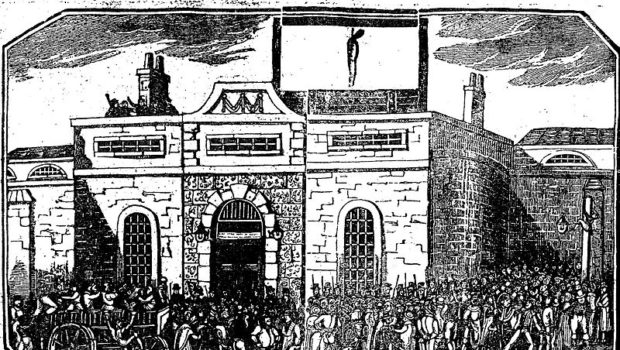 Now I Ain’t Saying He’s A Grave-Digger: The Burke and Hare Crimes

As the prelude of our Anatomy issue, Inez Imray diggs into the history of the Burke and Hare murders.

As Based on Supply and Demand

Blogging for a science magazine, you don’t often get the chance to delve into such a dark topic, but in light of our upcoming anatomy issue going back to the Burke and Hare murders of 1828 for a bit of history seems more than acceptable! In those days, learning anatomy was a lot harder because it was almost impossible to legally gain access to cadavers. Medical science was blossoming at this time and there was a huge supply and demand problem when it came to gaining access to bodies. The only legal source was using the bodies of executed criminals, but with less and less of these available what was an anatomy professor to do?! It all started with the sincerely shady act of body-snatching. Edinburgh Medical School was desperate for bodies to use in anatomy lectures, and body-snatchers were paid well for their work. So of course, the trade began to become increasingly popular and a known way to make a bit of money. This is where Burke and Hare come in, and crossed the very fine line between body snatching and becoming two of the most notorious murderers in history. They met when Burke moved in to a housing lodge in Tanner’s close in Edinburgh where Hare and his wife Margaret lived, and must have had a lot in common (apart from the fact they are both Irish and called William) because they became fast friends.

Robert Knox was a lecturer at Edinburgh Medical School with a huge reputation, who boasted about how many students paid to attend his lectures, where he promised a full anatomical demonstration in every one! You can image Knox may be particularly keen for striking deals with body snatchers. Burke and Hare’s first meeting with Knox wasn’t such a murderous one. A tenant died owing Hare rent money, and to make up for this loss they filled the coffin with bark to be buried and sold the body to Knox in secret.

In for the Kill

That first bit of money must have triggered something in Burke and Hare, leading to the killing of a massive 16 victims before they were eventually caught. Most of these victims were guests staying in the lodging house, many of which were piled with whiskey before they were killed. It wasn’t just the victims who were laden with whiskey, with Burke stating that both him and Hare were “generally in a state of intoxication” when each murder was committed. One lodger, Ann Gray, was the woman who eventually discovered their secret. She had left her stockings at her bed, and Burke completely refused to allow her to collect them. Ann was very suspicious (as you would be), and took her chance to investigate when her and her husband were left alone in the lodge. Under her bed, she found the body of their very last victim – Mrs Mary Docherty.

The news of the murders was a huge shock and scandal to the residents of Edinburgh, with the newspaper covering the trial of Burke and Hare selling 8000 more copies than usual! When it came to punishment, Hare testified against Burke and was granted immunity from prosecution. Burke on the other hand was hung where at least 20,000 people came to watch, then publicly dissected and now his skeleton can be seen in the Anatomy Museum of the Edinburgh Medical School. Assortments of items made from his skin were also sold on the streets of Edinburgh and in auction!

How to Get Away with Murder

In a twisted way, perhaps we have these two to thank for the supply of cadavers we now have to study anatomy. When illegal trade in corpses eventually led to a full scale mass murder, something had to be done! In 1832, the new anatomy act allowed anatomists to legally have access to ‘unclaimed bodies’ which families had not claimed to be buried, rather than just the bodies of executed criminals. In 2004, the Human Tissue Act was passed, allowing anonymous organ donation. In Scotland, this became the rule two years later.

Burke and Hare are incredibly well known in legend and pop culture to this day.

Up the close and doun the stair,
But and ben wi’ Burke and Hare.
Burke’s the butcher, Hare’s the thief,
Knox the boy that buys the beef.

This folk tale talks of ‘burkers’ attacking travellers and children in the street. Burke and Hare smothered so many of their victims,that they actually coined the term ‘burking’ meaning when a killer smothers their victim. Nowadays, people use it to describe any kind of cover up or concealment. Burke and Hare even managed to get a film made about them (albeit starring Simon Pegg and described as outrageously funny on the cover, which may not be entirely historically accurate). If you pay a visit to the Edinburgh dungeons, you can face the wrath of Burke and Hare for yourself (hopefully not getting picked on as much as I did).

For all those studying anatomy, count yourself lucky we live in an age where people can donate their bodies to science freely, and grave-digging is (I hope) a thing of the past!