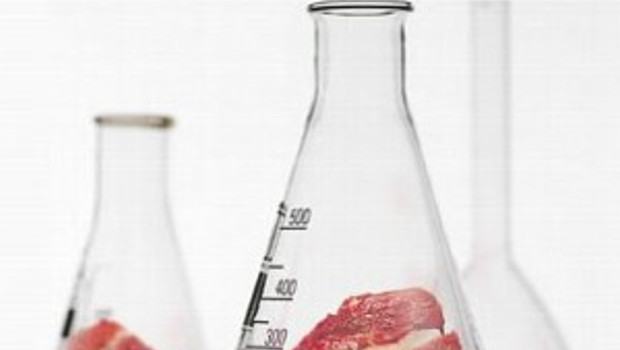 Meat in a Petri Dish

Everyone enjoys a big flavourful steak or a nice juicy burger, right? However, with increase of the human population creating growing demand for meat production, we might soon not all be able to have access to that. An alternative source of meat is being developed in the labs — in vitro meat, which will serve as the source of essential protein vital for healthy body development.

The idea was first introduced by Winston Churchill in the 1930s and was taken further by Willem van Eelen, a medical student of University of Amsterdam, who in 1999 — inspired by his lectures and after years of research — has finally received a patent for the Industrial Production of Meat Using Culture Methods.

How is it all made?

Firstly, starter myosatellite cells (a type of cell found in mature muscle) are harvested from an animal through a biopsy and placed in very small cultures. Then they are placed in scaffolds where they can grow on biodegradable material so it does not need to be removed before eating. The cells are then placed in a tank filled with a nutritious growth medium — a bioreactor. The cells are grown into very thin sheets of muscle tissue and then processed to make it tastier and look like the meat we know.

It can be made healthier for us than conventional animal tissue by controlling its composition, such as the percentage of saturated and polyunsaturated fatty acids and its genetic and protein content. It is also possible to limit the use of growth hormones and antibiotics which are very often used on livestock and are bad for human health. Close control of the conditions of production can also reduce the potential bacterial contamination and the spread of diseases on the meat.

In vitro meat production is much faster than conventional meat, as 10 stem cells can divide to yield 50,000 metric tons of meat in two months, in comparison to 15 months to grow a cow. It is also beneficial for the animals, as growing just the muscle tissue saves animals from living in poor conditions and suffering, and eventually their lives. Growing meat in labs would also be valuable in terms of reducing the emission of greenhouse gasses, as livestock produce about 24% of human related greenhouse gasses and take up a lot of land in the production of food required to feed them.

All the advantages make it seem the ideal solution to the present food problem, however there are certain downsides to it. Firstly, there would be differences in texture, ‘umami’ flavour and colour, caused by the lack of blood flow, bones, and connective tissues as in real meat. Additionally, the lack of veins constantly bringing vital nutrients and oxygen to the cells would make it very hard to keep them alive for long.

In vitro meat is also very expensive — both the liquid medium that the cells are grown in and the commercialization of the product. It is estimated that $160 million would have to be spent on making the product appealing to the consumers. This would result in the first generation of in vitro meat being twice as expensive as the conventional one!

Bright and tasty future ahead?

The first in vitro meat burger was tried out in August 2013. However, before synthetic meat is available to consumers on supermarket shelves, a lot more work has to be done to improve the final product making it as healthy and as ‘real’ texture-wise as possible. If it proves to be a successful substitution for conventional meat, it may solve the problem of increasing demand for food and may even be healthier for humans than animal meat!