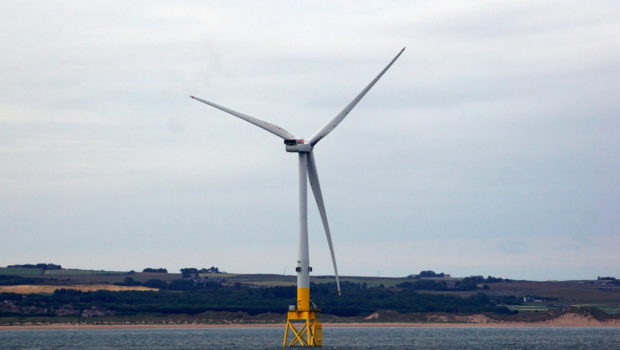 As you stroll along the Beach Boulevard in Aberdeen have you noticed that the outlook from the shore has changed quite drastically over the past year or so? Eleven offshore wind turbines have been installed along the coast of Aberdeen and the Shire as part of the European Offshore Wind Deployment Centre (EOWDC). It took only nine weeks for all 11 turbines, which have been generating power since July 2018, to be successfully installed.

The project gained publicity for being strongly opposed by Donald Trump. He believed the turbines would “spoil the view” from his controversial golf course ‘Trump International Golf Links’ in Balmedie, Aberdeenshire. Despite a lengthy legal battle, his case was dismissed by the UK supreme court in 2015, a year before the launch of his US presidential campaign.

However if you’re not a Trump supporter, why should you be interested in this £300 million project?

This wind farm is an important initial step in helping to build towards a cleaner, more renewable future for the area. A single rotation of one of the 8.8 MW turbines is reported to be able to power an average home for an entire day. These turbines are currently the most powerful in the world generating up to 312 GWh per annum and providing power to over 80,000 homes, helping to meet over 70% of Aberdeen’s domestic energy demand. It is predicted this should help reduce pollution and environmental impact by allowing Aberdeen to become less dependent on harmful fossil fuels. In fact, the turbines are expected to reduce CO2 emissions by 134,000 tonnes annually which is the equivalent of removing almost 35,000 cars from our roads.

Importantly, Vattenfall, the company responsible for the production and installation of the EOWDC, has also made sure that the whole project can be safely and quickly decommissioned without harming the marine environment.

Additionally, athough viewed by some as a blight on the landscape, these huge rotating structures are seen by others as modern engineering marvels. The blade tips of the turbines can rotate an impressive 230 mph during storms with wind speeds of up to 67 mph. This is especially impressive considering the blades are 262 feet (80 m) long. To put this into perspective, The Sir Duncan Rice Library on campus is only 42 meters tall.

So maybe the next time you’re passing by Aberdeen beach you can enjoy the view of the turbines while remembering the bright future they can provide to the North East.

Interested in finding out more about other ongoing environmental work in Aberdeen? Check out our previous article ‘Aberdeen Air Quality – What’s Being Done?’

Millie Zagulak is a Guest Author. Our guest authors write articles for us on a wide range of topics and come from a diverse variety of backgrounds. If you would like to write for us then head over to our Get Involved section to find out more or get in touch via email.